One of the best things about living in Hong Kong is the close proximity to great travel destinations.  Every time we take a trip I try to capture the experience in a narrative sent home to family.  While a few are dated now, they might help you plan your next adventure.  I’ll try to post a few here for the record. 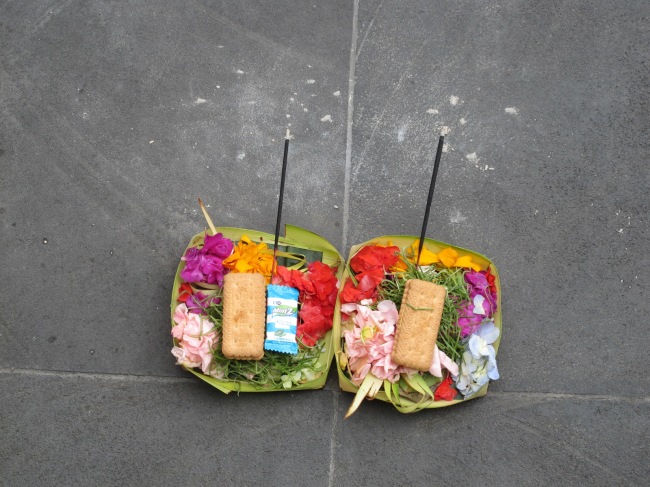 I had been dreaming of visiting Bali since my friend KI told me about her adventures there more than a decade ago.  Knowing that the kids had a break in mid-October and that my mother-i-law JR was planning to be in Asia at the same time, I booked a family trip.  Friends in HK recommended renting a villa rather than staying in a hotel, so after a big search we settled on the Villa Dewi Sri just outside Canggu on the south west coast of the island.

With the threat of a super typhoon looming, most of the Jason Wordie walking tour of Central I’d arranged to do with JR I surreptitiously spent on the phone trying to move up our departure by a day to beat the storm.  The storm never materialized, but the hype about it gave us an extra day in Bali, so no complaints!  Bali is an easy four-hour flight from HK and, having decided to hire the expediter to handle the on-arrivals visa process, we were through customs and on our way in a flash.

My initial impression of Bali was formed by the relentless traffic.  Though beautiful, I was dismayed that our introduction to the island was a tedious traffic jam to get across the crowded Kuta to Semanyak corridor.  We eventually fought our way and ended up at this lovely villa tucked away in a rice paddy field.  The house had four big bedrooms, a swimming pool and was tricked out with all the latest electronics.  It was fancy.  The likely kid bedroom had a fishpond feature surrounding the tub, so we relinquished the master to keep the kids from falling in the drink in the middle of the night.   The villa itself was great, but we were disappointed to learn that we couldn’t really take a walk from there.  The infrastructure development of the island hasn’t kept pace with the population growth, so the introduction of many vehicles and motorcycles on the tiny, shoulder less roads means that pedestrians put their lives at risk just walking down the street.  At one point we saw a BMW that had fallen off the raised road trying to move over enough to pass a vehicle coming the other way.

Nonetheless we had a laundry list of recommended sites, activities and restaurants to check out and a driver, Wayan Dirya (Wayan meaning first born, so there are many Wayans around town), to show us around. We explored the beaches and the shops of Semanyak, but mostly found the crowds to be tedious and the beaches not so nice.  Dudah and I had fun taking a surf lesson from the Quicksilver surf school one morning on perfect learner waves, but ironically I contracted a rash from the moldy rash guard they provided!

If you ask the kids what they remember of Bali they will say “WATERBOM!” Waterbom is a tourist trap in downtown Kuta, but I have to say that my friends were spot on.  It really was fun.  It was clean, well-organized, had clever locker and payment systems and nice cabanas for shady repose when we weren’t hurtling down the enormous slides on rubber rafts.   True to character, Mr.E was the first to the top of the massive slide and couldn’t get enough, but the others were close behind and we all had a blast.

The greatest moment of the entire vacation was related to my awesome mother-in-law.  Despite the fact that she lives at the beach, in all the time I’ve known her I have never seen her don a bathing suit.  Yet she showed up in Bali decked with a stylish suit and looking better than ever and raced Mr.E to the top of the tower.  Watching JR hurtle down the macaroni slide backwards at Waterbom will forever be one of my very favorite memories of our carefree fun times!  She spent more time in the pool with the grand kids than you can imagine and they were totally thrilled.

Running was definitely not an option in Bali, but yoga was plentiful, so I availed myself of a local retreat center one afternoon.  I expected a good meditative hatha class, but instead found (after having been dropped off) that the class on offer was partner acro yoga, more akin to circus training than yoga in my book.  Within 15 minutes I had some woman’s heel in my hip socket and I was flying over her head.  Later, I’d put my life in the hands of a masseuse yogi as I turned completely upside down with my legs in lotus with his heels in my hips and my arms in reverse prayer behind my back. Are you picturing this?

Bali, an anomalous Hindu island in the otherwise predominantly Muslim country of Indonesia is rich with culture and ritual.  We tried our best to learn and experience what we could.  Everywhere we went in Bali we saw small offerings usually hand-made, open-topped boxes filled with flower petals and incense.  One rainy night we saw a beautiful young woman venture into the middle of an incredibly crowded traffic intersection and bend down to lay an offering right in the middle of the road.

There are many beautiful temples to see.  We chose to visit the 16th century Pura Tanah Lot, which sits on a rocky outcropping that becomes an island at high tide.  There are several picturesque views, but again, rather oppressive crowds. On the same day we went to a really creepy, but strangely enticing monkey park where a guide with a stick walked us around hundreds of monkeys and fruit bats, then facilitated photo opportunities for an extra fee holding the same.  You can even touch a deadly snake if you feel so moved.  Once finished touring around the park, visitors are encouraged to purchase souvenirs, including phallic wood-carvings.  We capped off that day with a sunset BBQ at local favorite surf spot, Echo Beach, with Mr. E’s “twin”  (a dear friend from HK) and his family, also vacationing there.

On the way to Ubud the next day we took in the traditional Barong and Keris dance performance in Denpasar.  It is a classic eternal fight between good and evil spirits, but in this story neither prevails in the end.  The drive to Ubud got prettier and cooler as we ascended the mountains.  These were the Bali shots I had seen in the movies and anticipated.  Ubud is a thriving town with unique shops, a charming art museum and its own Monkey forest.  JR and I spent a morning wandering the town wishing we’d had more time there.  If I ever go back to Bali, I think I’ll focus my adventure around Ubud.

A visionary artist/environmentalist, Canadian transplant named John Hardy enriched our Bali experience immeasurably, and we didn’t even meet him.  Hardy arrived in Bali in the 1970s and started a line of jewelry that eventually achieved great success.  JR and I spent a magical afternoon touring the jewelry factory where everything is hand-made by locals on a sustainable campus made predominantly of bamboo.  The company offers an organic lunch from the gardens to the whole factory staff every day.  We were fortunate to be able to join the designers and staff for an al fresco lunch where we learned a lot more about Hardy’s vision an PT Bamboo that helped create it and then we had some fun in the showroom!

JR and I were able to sneak away for our day in Ubud also thanks to Hardy.  Having sold the company to his top designer back in 2008, he put his energy and resources into his latest vision called The Green School.  I had heard that in addition to being an accredited private school, they offered daily “Green Camp,” so I signed my three kids up for a day of green fun.  It was a little hard to drop my kids in the jungle of Indonesia with complete strangers and leave, but I decided the potential benefits of the adventure outweighed the nonspecific anxiety I felt, so I did it.

They had a total, complete and utter blast.  They spent the day planting rice, climbing coconut trees, wrestling in the mud pit designed specifically for that purpose, eating organic lunch from the gardens on the property, solving a treasure hunt and, gulp, jumping from a swinging rope into a rushing river and getting pulled out downstream by the counselor.  Yes, Mr.E too.  Just four years old!  Did I say, gulp?   I retrieved them filthy and smiling, but Mr.E collapsed in my arms, proud of himself but also profoundly relieved to be reunited with mom I think.

Our final adventure in the Ubud environs involved riding elephants in the rain through a refuge safari park.  It was cliché thing to do, but the place was well maintained and the elephants seemed to be well cared for.  Mr.E fed the elephants sugarcane while Dudah and Sidewalk circumnavigated the park.

I have to say, overall, that the food in Bali wasn’t really what I expected either.  Though others rave, we had good but not fantastic meals.  La Lucciola, a beautiful beachside restaurant was fun, particularly in the midst of a torrential downpour that necessitated a glass of rose to see it out.   Metis, Chandi, the Four Seasons in Ubud and The Junction all had their merits which were mostly aesthetic, but produced largely forgettable meals.  Chef Will Meyrick’s innovative take on street food at ultra hip Sarong was probably the best of the meals we ate out. One of my favorite meals was at a place called Naughty Nuri’s that is all about ribs.  It’s a local institution where the whole island mingles for their straightforward tasty fare.

Next time we go to Bali we’ll check out the Bukit & Jimbaran Bay.  We’ll try to climb the volcano and have a meal at Ubud’s famous Mozaic.  Maybe we’ll even make it to infamous Ku de Ta…or maybe we’ll just sign up for a yoga retreat and never leave the yoga center.

Though I enjoyed Eat, Pray Love, I have to say that overall I didn’t see Gilbert’s (or KI’s) Bali. We had a magical time filled with treasured memories and wonderful once-in-a-lifetime experiences, but I do worry for Bali and islands like it that its popularity may be it’s eventual downfall as it’s beauty is ultimately consumed by those who seek it.